The Peer Gynt legends appear to have sprung up around the lives of two men, Peder 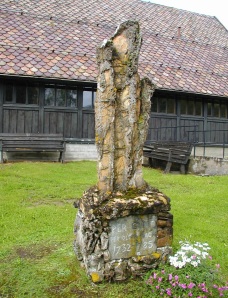 Lauritson and Per Olsen Hågå, both of whom lived in the farmhouse near Vinstra.  Scholars and professional Gyntians debate which man truly inspired more of the stories.  The Hågå camp won a victory when they erected a memorial stone to their man in a Vinstra cemetery.  But the Lauritsons remain firm.  Here’s what’s at stake:

The original Peer Gynt inspired a slew of heroic legends.  Ibsen collected these stories, but as scholar Sverre Mørkhagen discusses in his book, Peer Gynt: Historie, sagn og “forbandet Digt,” Ibsen only used a fraction of the Gynt lore.  Unused tales include the one where Peer outwitted the Greenclad One (who turned out to be a troll), and one where Peer managed to spy on a Troll wedding procession.  Since humans weren’t supposed to be able to see trolls at will, Peer used a trick: he washed his eyes with his own urine, and thus gave himself Troll Vision.  Crafty!